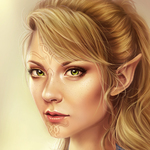 
Appearance
Hair: Honey blonde with buttery sun streaks, hanging to mid-back when down, but usually kept up.
Eyes: Wide and round as is characteristic of Dalish elves. They are a vivid dark grass green at the edge of the iris, fading to a subtle rust ring at the pupil.

Other: While some have an image of what a mage looks like, Velanna’s life has lent to a very different build. She’s ropey muscle with a regal posture who inclines her head to no one. Velanna’s magic is very physical and rooted in the earth, demanding almost as much out of her body as her mana, and as a result she is quite strong. While she is fair in complexion she is naturally kissed and freckled by the sun. While Velanna can be quite severe in her features, she can also be considered striking, her lips curving into more of a duck-lipped smirk than a smile when she deigns to grace anyone with it.

Weapons: Heart of the Forest--A dragonbone staff she’s had since her Keeper’s training. The wood is from the core of the eldest tree in glen ravaged by fire, which managed to remain alive. The glen was favored by Ilshae's clan, and she was devastated to find it in ruin. A simple steel dagger.

Usual Garments/Armor: Leather skins with long flaps on the front and back and slit far up the sides, trimmed in fur at the shoulders, with a completely improbable neckline. She wears woven leather leggings with stirrups, like many Dalish elves. It’s worn cinched around the waist with a simple leather belt, adorned with several small pouches.

Inventory: Elfroot, healing poultices. Her Keeper’s ring. A journal of her own writings, gifted to her by Aedan Cousland. A piece of carved greenstone, not dissimilar from her eyes in colour, practically worthless but cared for. Her Warden’s Oath pendant, no longer worn, but also kept wrapped in a piece of leather. A considerable measure of rope.


Personality
Velanna can be nice. She’s even been known to be pleasant at times. Almost caring. Most people would not use these words to describe her. Since a very young age she’s had little understanding or use for basic social niceties. Instead, she learned to enjoy and even relish her self-enforced solitude. Velanna is confident to a degree that some might call her arrogant, though she just sees no reason to downplay her abilities or accomplishments.

However, this also means she has difficulty admitting her mistakes. She holds herself up self-righteously in many of her actions, often believing they are justified. Usually coming around to accepting otherwise requires outside influence and a good deal of introspection. Once she does accept these wrong, she harbors the guilt like a precious thing inside her, almost unwilling to put it down.

Standoffish and prickly to a fold, Velanna is also remarkably loyal, even if she has a difficult time showing it. She has a protective streak that can and sometimes does lead to her own detriment; there is little she will not do for a person she cares for.

History
The other children in Velanna’s clan stopped playing with her when she was five. This did not bother her overmuch, not understanding the point of their games, and she took this time to devote herself to studying as much about the Dalish as possible. When her magic—a small flame in her palm—manifested at six, she walked straight up to Keeper Ilshae and announced that she would now be her First. So impressed with her moxy, Ilshae gladly took her on. This boldness has shaped much of the rest of her life both for better and for worse.

Just as determinedly as she became First, she left it behind while seeking vengeance for an attempt by shemlen to burn her clan out of the woods. With a small group of elves, including her younger sister Seranni, Velanna set out to do this despite being forbidden by Ilshae. Only Velanna and Seranni survived this attack, and Velanna believed her sister taken captive by the shemlen. Exiled and enraged, Velanna took this out on local merchant caravans traveling through the Wending Wood. It was then that she met Aedan Cousland and his fellow Wardens, at which point Velanna made her next impulsive but steadfast decision: she would become a Grey Warden if it enabled her to find Seranni. As the dodgy decision suited both her and Aedan, she was Joined.

Velanna suddenly found herself needing to trust the very shemlen she did not, keeping them at an arm’s length at best, and deflecting their attempts at friendship with an acerbic tongue. With time, she grew fond of the dwarf Sigrun, and but it was some time before her comfort with the men allowed her to let her guard down. Their over exuberant efforts did not help them.

Yet, when they found Seranni, things did not go the way Velanna had hoped. Her sister was not a prisoner, had not been taken by shems at all. When Seranni helped them escape the mines, she chose to remain with the Architect. Velanna was devastated, but expressed this through agitation and anger, mostly directed at Aedan.

Still, Velanna fought valiantly in the Battle for Amaranthine with her fellow Grey Wardens, almost convinced she’d found a place for herself among them. Her magic the only thing that stopped a section of wall from crushing her, Velanna barely escaped death. Aedan’s decision to kill the Architect enraged her as much as anyone thought it could. When Seranni did not return even then, her irritation hit new heights, and she distanced herself from the Hero of Ferelden, again blaming him. It was her final hasty decision that convinced her to flee, proof that the Wardens were changing her in ways she did not approve of. The first opportunity she found in the aftermath of the fighting, she vanished.

Seeking allies to retrieve Seranni, Velanna attempted a reconciliation with her clan, though she was unable to apologise for leaving. A heated standoff with Ilshae’s successor ensued after which her exile was reestablished. Velanna returned to the woods for a time, leaving rumors of a Dalish woman defending farms from straggler darkspawn. Soon, she chose to seek Seranni on her own, and went to the Deep Roads without another thought. A life of isolation and seclusion never bothered her, even from an early age, and she kept one singular focus: find Seranni at any cost. After years of searching above and below ground, Seranni’s mutilated body was found, and Velanna was forced to accept her mission had failed. Velanna was not seen again, not by anyone who lived to tell of it, though stirrings of rumors of a Dalish mage burning darkspawn or ripping them apart with the forces of nature have risen again. With no clan to return to, and no quest to drive her focus, she's considered reuniting with the Wardens, having accepted that this is the only place she may ever be accepted, but it was only a thought, dismissed it almost as quickly as it appeared, though she has not discounted it entirely.