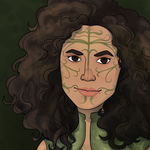 
Appearance
Hair: Kinky curly and brassy brown. If straight, it would fall to the middle of her back but it springs to just skimming her shoulders and stands up high on her head.
Eyes: Very dark brown. Her left iris has a large freckle.

Other: Urana has deep brown skin with bronze undertones, enhanced by the sun. Her cheeks are high-appled and her jaw strong. When she smiles it’s broad and wide, deeply dimpling her cheeks and showing her eyeteeth.

Her vallaslin grows up from her nose and above her eyes like a reaching tree, with vine-like details over the apples of her cheeks, and shapes dusting her chin, giving her a mask as a tribute to Dirthaman, the Keeper of Secrets.

Weapons: Staff made of wood from the dahl'amythal tree, reinforced with ironbark, and worn smooth from use. The haft is bound with hide, and it is topped with a rough-shaped and polished piece of amber held in place by the wood.

Usual Garments/Armor: Urana’s clothing consists of a long maille shirt worn over light leather robes. The shoulders are made of golden eagle feathers. Leather bracers adorn each wrist, and she wears long, footless, Dalish leggings under woven leather leg guards. Her belt has many pouches for carrying essentials.

Inventory: Elfroot. Thirty feet of sturdy rope from a fiber found in the Brecilian. Small projectiles, such as acorns and small stones. A crescent-shaped herb gathering knife. A sylvanwood ring depicting The Great Betrayal. A symbol of Mythal, carved from a halla’s horn and worn as an amulet, given to her by the clan’s hahren.

Personality
Urana is often described as cold and harsh. She carries herself with austerity, her posture regal and sometimes rigid. She cares very deeply for her clan, believing that an iron facade is important in maintaining their confidence in her. She holds herself to appearing strong when she doesn’t feel she is. Like the rock she arms herself with, she might seem immovable, but like the roots and vines she commands, she can bend and adapt if she must. Kindness is not foreign to her, only difficult to see. She won’t coddle, and will not spare feelings, but she knows that even the people are fallible, including herself.

Urana guards the history and recovered culture of the Dalish. She teaches with an expectation of devotion in those who would learn from her, and sets standards she knows may be too high. Preservation and recovery of what was lost remains an active goal, one which she impresses upon the rest of the clan, and one she will emphasize with any First she may eventually take on.

She is not cruel, but she will act in the best interest of the clan, no matter how extreme her action may seem. The safety and prosperity of her clan is her top priority, and she devotes as much of herself as possible to this. Seldom does she forgive, and she never forgets.

History
Urana was not born to the Etharla clan, but it is the one she considers herself native to. She doesn’t remember which she was actually born to, and she doesn’t care. Traded to Etharla when she was nine, she was taken in and trained as First by their Keeper, Ealga.

The stories of the pantheon kept Urana’s rapt attention as a child. With the care that was expected of any First, she studied diligently, always aware that her position was a privilege, and under the belief she could be replaced at any time. She worked hard to memorize stories, history, and writing which would be vital to her role. The entire forest, from The Dales, the edge of the Western Approach, and to the Hinterlands became her classroom as their aravels roamed Thedas. She felt herself grounded in the rocks of the earth and mountains and united with the trees and brambles which grew there. This didn’t leave much time for running with the other children, and Urana lived a childhood somewhat separated from the other elves her age. This only helped her to become what she felt was a more objective person, keeping her emotional attachments to a minimum.

In 27 Kingsway, Ealga passed on, and as they planted the tree above her resting place, Urana transitioned from First to Keeper. The initial change was jarring for everyone, as Ealga had been Keeper longer than Urana remembered, but the change was felt no greater by anyone than by Urana. Her mentor and parental figure gone, she fought herself hard to not show how shattered she was at the loss.

Despite the clan living on the move, they found themselves in Ferelden during the Blight, unavailable to avoid all of the horde while traveling, unawares, through the Wilds. Lives lost during the Blight were numerous. In the years following the Blight, clan Etharla found their numbers almost insufficient to maintain them. Fighting and child-rearing aged members were dwindling, and the number of hunters remaining were not enough to bring in needed supplies. With help from the clan emissary, Urana swallowed pride and attempted to reach out to other clans for assistance, with ranging from regrets to outright refusal. As an Arlathven was unavailable to be called, she begged the nearest clans to consider spreading out volunteers from members to clans in need so numbers could replenish with new bloodlines. As such, Urana's diminished clan settled at the far opposite end of the Brecilian, at Keeper Lanaya's terse request, so these transfers can be worked out. For now, they make these far reaches of the Brecilian their home, though they are ready to pull up stake at any time.

Eventually Urana will need to take on a First, as the time for considering candidates has come. Instead, she works to help her clan prosper in any way she is able, helping to prepare and send out traders and diplomats to the humans. Together with the hahren, she hopes to bring peace and stability, even petitioning Ferelden's Queen for land treaties. Perhaps after, she will be ready for this next step. Congratulations on your approval stamp! Go forth and RP.