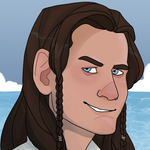 
Appearance
Hair: Black, long, and oiled in the fashion of sailors, often pulled back tight in a ponytail. He also keeps a beard in varying degrees of grooming, depending on which profession he is claiming to be a part of.
Eyes: Startling icy blue, giving his threatening glares another layer of menace.

Other: Micah has a crooked nose, a few missing molars, and other scars and markings one might expect of a sailor who often resorts to sword fights and fisticuffs.

Weapons: Two swords, one steel and one veridium.

Usual Garments/Armor: Micah typically wears clothing that allows both freedom of movement but safety for working in rigging of ships. He tends to wool for warmth while at sea, which often means he has a lingering ‘wet sheep’ smell when he’s not, even when wearing more landlubber style clothes of linen or other strong fibers. When working in a supposedly official capacity, he dons a uniform appropriate to whatever flag he claims to be privateering under.

Inventory: Coin, thirty feet of rope, a mug he keeps on his belt and carries with him while ashore. He is flashy about having money, but keeps very little, apart from coin, that he would not live without.


Personality
Micah is arrogant and insufferable. He enjoys being in control of the situation, and uses his brute force and coin to get his way. He’s capable of being charming when he chooses to be, and more so when he’s deep into his cups, but it’s a facade for his hot temper, which is also heightened by drink. He is skilled at being what he needs to be to get his way, but when that fails, he is not above bullying and violence. His threats are often backed up with the muscle of various people over whom he enjoys ‘holding court’, and who vie for his favor and coin. He enjoys womanizing, smuggling, but sailing more than anything.

History
Micah was born to a just-above-poverty family, a son of a washerwoman and groundskeeper who had several other children to wrangle. As such, a lack of supervision mean that at a young age he was running with packs in small child gangs where he learned pickpocketing and how to bully those weaker than him, sometimes including animals if it got him what he wanted from other people. He grew fast, gaining muscle from fighting, climbing, and other mischief that an errant child might get into.

In 9:13, at eight years old, he was taken on as a ship’s boy with a privateering crew. He learned swordsmanship and seamanship, as well as the workings of the privateering business. He was taught to read and write, and by the time he was twelve, he was literate and had impressive penmanship, including calligraphy.

One a trip through Antiva in the winter of 9:17, Micah’s ship was boarded by pirates. Most of the crew was killed to protect the identities of the pirates from Crown officials, but Micah, being young and skilled, was deemed worth keeping. The former child bully delighted in the attention from the pirate crew, and favor from the captain. He became a competent pugilist, and worked his way up to First Mate. Moving beyond that holds no interest, as it provides him more power and control out of the Captain’s sight. His reputation for roughing up the people to cover his lies, and his lusty eyes, earned him the moniker “Rough Dog” which he wears with pride.

With the aid of his Captain, he’s forged many documents granting his ship privateering rights, and will often sail under false protections from nations who never knew his name. His roots in Amaranthine and connections to his old child gangs have helped him grow a network of thieves and smugglers who work for him out of admiration or fear. He’ll accept either.

Most often Micah can be found in a tavern while ashore, wooing women and bullying at will. He has a rough hand, and barmaids fear him. There is no tavern he likes more than The Belching Pig in Amaranthine, where he lives like a Teyrn in charge of an army.