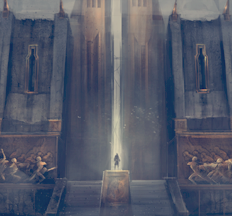 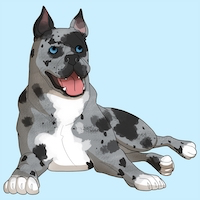 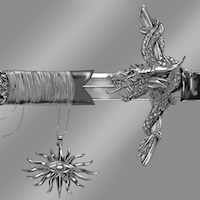 
Appearance
Hair: Orric has blonde hair which is kept closely shaven at the sides and grown long on the top. He braids this part and ties it back with multiple fine leather bands.

Other: Unlike Orzammar dwarves, Kal-Sharok dwarves are noticeably pale with a vaguely sickly demeanour. Orric is no different, though his facial hair and numerous scars across his face and body help to distract from this detail.

Usual Garments/Armor: Dragonbone (tier 7) heavy armour, decorated with the heraldry of the Grey Wardens. Although lovingly maintained and repaired, it is clear that it has protected its owner in countless battles.

Inventory: A small vial containing the concoction required for the Joining - there is only enough to Join one individual; coin purse; basic healing supplies; whetstone for his weapons


Personality
Mysteries abound throughout Thedas over the existence of Kal-Sharok. Orric is the epitome of those rumours: taciturn, stoic, and with a very long memory. He trusts very few people and keeps his own counsel on most matters. Even by Kal-Sharok standards, he is considered to be aloof and distant. He will remember a grudge for years, and has been known to hold onto it even if the perpetrator has long since departed this mortal realm.

He is, however, very much of the Stone. His recruitment into the Grey Wardens was a practical choice, given that he had been tainted during a skirmish and would die anyway, but he holds no resentment that his Joining has brought him to the Surface. Instead, he seeks every opportunity to return to the Deep, using his honed stone sense to venture further and further into the earth. He is diligent and focused, rarely allowing anyone to distract him from this purpose, regardless who they may be or what title they may hold.

He is no nonsense and has a low threshold for those who perpetuate such events. There is far too much to be done to suppress the darkspawn for him to waste time on petty squabbles or unrequited love affairs. He expects those around him to share this attitude, and is routinely disappointed when it proves otherwise.


History
Born to two warriors, Orric was brought up in the reclusive thaig of Kal-Sharok. Raised as a warrior from birth, he was taught to marvel and revere the Kal-Sharok Paragons whose deeds were carved into the walls of the Deep Roads themselves. Wishing to understand more of the history of these Paragons, Orric expressed interest in scholarly pursuits in addition to training his warrior talents. Fortunately, his parents understood the importance of both, and permitted him to train both mind and muscle.

Having been taken into the Deep by his parents since he was old enough to grip the smallest of daggers, Orric developed an excellent Stone sense. It was for that reason that when he was of age, he sought induction into the Rock-Knockers, much to the delight and pride of his parents. He was accepted and it was during this time that he learned the importance of not only healing and survival skills, but also the necessity of trapping to ensure that there was always something to eat even on the longest expeditions into the Deep. However, his Stone sense proved to be somewhat of a barrier to his commitment to these skills, since he was uncannily capable of finding his way through even the most maze-like of routes. Hence he has only the most basic of understanding of these skills.

What did capture his attention, however, was the coveted fighting form of the Berserker. Given the role of the Rock-Knockers, particularly with the remote and isolated location of Kal Sharok, it made sense to Orric that he perfect this particular skill. One of the time-served Rock-Knockers recognised his skills and, as a favour to his parents, agreed to teach him each painstaking stage of the specialisation. It took over three years for Orric to satisfy his task-master, but he was eventually deemed as being worthy of the title of Berserker. In the process, he learned much of combat and strategy, using this to augment his specialisation.

For almost a decade, Orric continued to serve in the Knock-Rockers, gaining plenty of battle experience and no shortage of scars. He met the man he would give his heart to during this time. A fellow Rock-Knocker by the name of Rogal. Rogal was an archer who was the opposite of Orric in everything: sunny when Orric was sour, complimentary when Orric was chastising, and whimsical when Orric was withdrawn. However, given the nature of the low birth rate within Kal-Sharok, both men understood the necessity of performing their duties with regard to siring the next generation. Fortunately, such agreements are not unknown within the thaig, and they each found women for whom a romantic relationship was not required. All parties involved understood their roles and, in time, two more children were born into the thaig. Both men kept close ties with their respective children, but committed themselves to one another in all other aspects.

It was in 9.12 that Orric first glimpsed the surface. Given the highly unusual circumstances, it was requested that a number of Rock-Knockers accompany a lord of Kal-Sharok to a Grand Tourney in the Free Marches. Their skills were required not only to protect the lord but to compete in the Tourney; they were successful. Since then, Orric has straddled the worlds of the surface and of the Deep. Although there is no direct access to the surface into Kal-Sharok, that does not mean that gaining access to the surface is impossible. Hence Orric would, on occasion, visit the surface to obtain goods from merchants in either Orlais or the Anderfels. Many assumed any dwarf was a surface dwarf from Orzammar and although the association with Orzammar rankled, Orric did not correct this misconception.

It was on his return from one such visit that Orric was beset by darkspawn. An experienced Rock-Knocker, he held his own against at least half a dozen before being overwhelmed. Fortunately, he was not yet so Deep that there was not some assistance nearby. A group of Orlesian Grey Wardens had been tracking the darkspawn and were able to come to his aid, preventing the ‘spawn from making their kill. Alas, Orric had suffered multiple wounds, all of which were tainted to some degree. Since the Rock-Knockers boast a more modern attitude towards their duty than their Orzammar counterparts, Orric accepted the offer of an Orlesian Grey Warden to Join him instead.

He was brought to the surface and successfully Joined. Initially, the Grey Wardens tried to restrict Orric’s whereabouts, treating him as a naive initiate rather than a seasoned warrior. He ignored them, returning to the Deep periodically to slay darkspawn. He always ensured that these missions into the Deep crossed paths with other Rock-Knockers, in particular Ragol. Given that it could hardly be claimed he was shirking his duties, and since they did not know of Orric’s continued relationship, the Wardens quickly adapted their approach and appointed him as a mission leader, sending a small group of Wardens with him.

Consequently, Orric and Ragol agreed to part ways, practical if sorrowful in their attitudes. The isolationist tendencies of Kal-Sharok were deeply ingrained in both and neither would risk that the Grey Wardens might realise the exact location of the remote thaig. Moreover, while Orric was resigned to high probability that he would lose Ragol to the ‘spawn, he was not prepared to lose him to either the harsh restrictions of the Grey Wardens or, worse, the Joining itself. A separation entirely on their terms was the only acceptable outcome. Slipping away from their respective expeditions, the pair spent one loving last night together before separating. It is a closely cherished memory for Orric.

Like many who lived and fought in the Deep, Orric knew of the coming of the Fifth Blight before most of Thedas. There were surges of darkspawn in the months prior to what would become known as the Fifth Blight. Then, suddenly, the Deep emptied as the darkspawn emerged onto the surface. While Orric would have willingly followed their trail through the Deep and into Ferelden, the blocked passages and crumbling Roads near to Orzammar meant this was impossible. Then came the order that no Orlesian Grey Wardens were not to cross Ferelden’s borders without express permission of the Warden-Commander.

Instead, Orric evaded the other Wardens and travelled to Kal Sharok, somewhat concerned over how it had fared with the surge in darkspawn. He found little evidence of the Blight upon the ancient thaig. In fact, his daughter, now an adult herself, was married and expecting her own child. Of Ragol, he could find no news. Usually, for a Rock-Knocker, that suggested a worthy death against the darkspawn. He hoped it was so.

Re-emerging topside in Orlais, Orric discovered that much had happened over the course of a year. The Blight had been defeated by two young and inexperienced Wardens, although there was still much mystery over the full circumstances. For Orric, who by sheer virtue of his time served in the Deep was considered a Senior Warden, this held little interest. He returned to his habit of roaming through the Deep, noting the strange ebb and flow of darkspawn numbers over the next few months. It was not until reports of the newly appointed Ferelden Warden-Commander’s absence that Orric took note of what was happening in Ferelden once more. Aedan Cousland had vanished without a trace and a request had been sent to Weisshaupt to appoint a successor. Weisshaupt, with the sloping shoulders it was famed for, had passed off the decision to the nearest country: Orlais. Even Orric, with his dismissive attitude of all human politics, understood that was an incredibly short-sighted decision. Even more so when that said short-sighted decision meant that he was identified as a suitable replacement. There had been some form of darkspawn invasion from the Deep below Ferelden and with his experience, Orric was deemed as best suited to fully investigate and ensure the threat was neutralised.

With the promise of new adventures in distant Deep Roads, Orric accepted the appointment to Warden-Commander. He arrived in Ferelden in autumn of 9.32 and immediately set about making arrangements to travel into the Deep, leaving the majority of other matters in the hands of his few Senior Wardens. 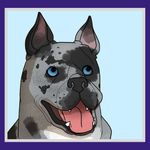